Bunch of jokers from down south who have been wanking over too many Scum Dribblerzzz live tapes, feed me like a fucking dog, this is without question the future of rock and roll. There is a 72 song tape that has titles such as Shit City, london shit city (too right) , London Boys shit, London Girls shit and  Too Many Good Musicians in the Wankys, they are obviously not talking about me. The cassette comes with a beautiful poster that now adorns the wall of Studio Distortion Party.

Well the 3rd test pressing for the flexi arrived...in absolutely terrible condition (once again), my needle looks like it's on a roller coaster, however the good news is that they play perfectly on my turntable and sound excellent so it's approved. Lets hope the finished product arrives in better condition. 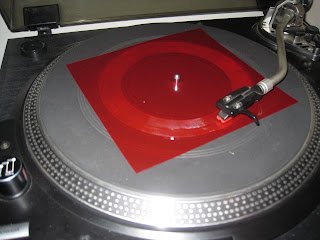 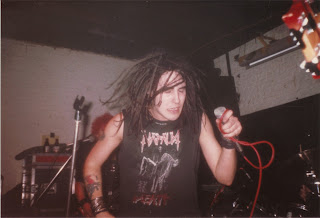 As you are probably aware Phil Vane died recently. Phil was the on/off singer in Extreme Noise Terror (ENT) and Optimum Wound Profile. I used to hang around with Phil in 88-89 and although we never became friends, I have some very fond memories of spending fun nights at his bedsit, ate some great food and listened to some great sounds. I respected Phil for the money he raised for animal rights organisations, mostly local (to Phil) hunt sabs. If I remember correctly the money he raised from putting on gigs at the Caribbean Centre bought them a van.  He also saw animal rights as something more than a five-minute fashion and remained a vegetarian until his early death; this is something I admire.
ENT made an absolutely outstanding recording that was released as a split album with Chaos UK on the Manic Ears label. This recording is a landmark in the history of brutal music; to be honest I don’t think any band has since managed to produce such a raw, brutal and urgent sound. Imagine if you can a sped up early Discharge with the singers of Gism and Rattus, Dean Jones providing the Gism style vocals and Phil doing the crazed Rattus impressions, they even used to switch those styles, though the Dean Gism and Phil Rattus always worked best. A classic Hardcore Punk record! I first heard this recording as a demo and with no info assumed they were Japanese. I was overjoyed to learn the band would be playing at a pub that I used to frequent called the Mermaid in Birmingham, it wasn’t until the band started playing that I discovered they were actually a British band. That night they blew the roof off the place.
Imagine how delighted I was when I had the opportunity to play in the band. The time I spent in ENT is something I rarely talk about (I’m not one for looking backwards) and it’s an odd thing for me to now reflect upon. I played in the band for about a year or so in 88 and 89, doing two European tours and a few recordings, the only recording I ever listen to is the 2nd John Peel session (raw as hell), which was put out as a bootleg 7” in Belgium. The first two versions (there were three in total) of Holocaust in your Head are pretty terrible, I guess not rehearsing and abuse of various illicit substances contributed to those atrocities. Though I assume the band and Phil were happy with the Hurt Records pressing as it was recently re-issued on vinyl by a German label having previously been re-issued on Compact Disc. I have not heard but am actually curious to hear these re-presses to see if they rectified the sound errors that appeared on the original Hurt Records pressing. The tours I did with the band were tough but fun, on the downside we had very little food, no money and a hyperactive drummer with a big mouth, the plus side was the gigs were usually amazing, lots of booze and the opportunity to travel to places that I have since visited on numerous occasions.
Sadly later ENT material never captured the rawness of their first recording, though many consider some of their later albums (the afore mentioned Hurt pressing of Holocaust and Phonophobia) to be classics. The band is still around now playing some very unimaginative and boring Grindcore, the only saving grace being the Jones/Vane vocal attack. They have in the past few years toured in the USA and Japan and played festivals around Europe, I’m confident that Phil would have loved those experiences.
I will remember Phil by spinning the Chaos UK split LP and thinking of him as being an integral part in one of the greatest Hardcore Punk albums ever made.
My deepest sympathies go out to his friends and family.
The death of somebody I know is a constant reminder that life is precious, if I can pass any words of wisdom onto people out there then it’s live life to the full and try to spent it with people you love and care about.
As a tribute to Phil I am sharing some pictures of him from my private punk rock archive, enjoy. 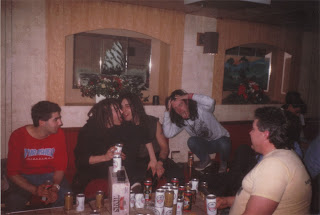 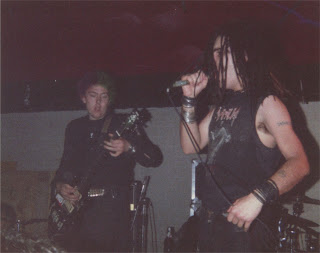 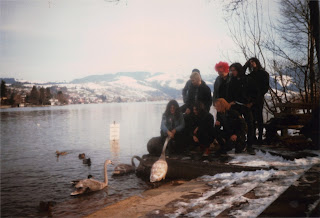 Lets call this picture Extreme Fear of Napalm Terror. Phil is on the right. 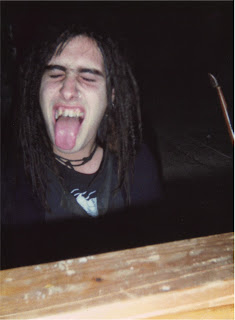 Rejected for a 2nd time 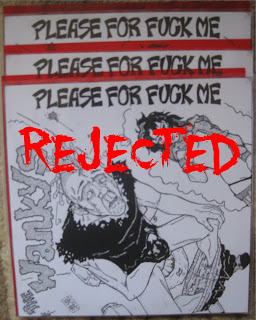 This saga continues, for the 2nd time the test pressing for the Wankys flexi disc has been rejected, 3rd time lucky, lets hope so. Strange thing is I have probably made 20-30 records and have never rejected any test pressings until now.
My email is not working, so don't try and contact me that way until the problem gets resolved.
Posted by MrWanky at 02:41:00 No comments: