I have a pile of these here, SOLD OUT. 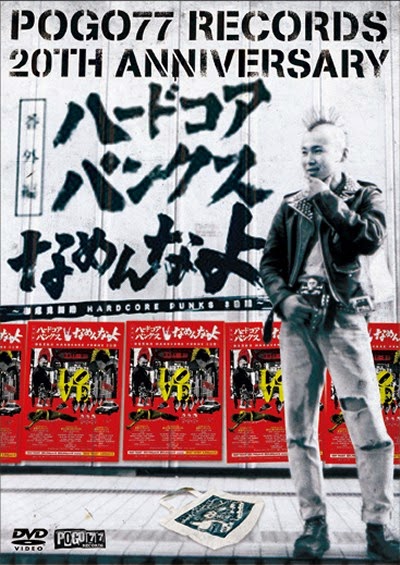 Hello, I have a bunch of new items in for distro from Pogo 77 Records from Japan, the label is owned by the wonderful Nori from Tom and Boot Boys, he’s the bloke who likes to get naked at gigs in Japan. Anyway if you want anything shoot me an e-mail to wankys@hotmail.co.uk and I’ll sort out a way to get the items to you as cheaply as possible
V/A- PUNKS AND SKINS ARE FUCKIN'WALKING DOWN THE STREET CD £7 Great comp including Tom and Boot Boys, Laukaus, Kruw, Persevere, Shit Faced. Impulsive etc. 20 bands, 20 songs. Last copies of this comp.
THE DISCOCKS- Don’t Be Foooled…CD £7 Ctachy UK82 style punk album from 2006, could have came out on Beat The System Records in 1982.
LAUKAUS- CDEP £5, Mini CD of the amazing Finnish influenced punk Schizophrenia must have got a lot of influence from these.
PUNK AS FUCK DVD x 5 £7, Absolutely amazing multi-camera pro sound DVD that only the Japanese seem to make. I picked this up when it was first released and must have cost me about £20. Featuring TOM&BOOTBOYS, THE AVOIDED, EXTINCT GOVERNMENT, OrdER, F.I.N.A.L., LIFE, ABRAHAM CROSS, IMPULSIVE, LAUKAUS, CONTRAST ATTITUDE, LITTLE BASTARDS, THE DISCLAPTIES, THE BASEMENTS, NO EVACUATIONS and SIGN OF LIFE.
BEER BELLY- Super Nonsense Pogo Attack 7” EP £5. Great ep from one of my favourite new Japanese bands. This band makes me happy, they want to make me drink beer.
DISCOCKS- Demo 91 7” EP £5. Great demo, great ep, raw and snotty punk rock, I got the last copies of this from Pogo 77.
CENTIPEDE- Double 7” ep £8 Great new (ish) band featuring member of ADDICTION. Shit-kicking 70’s style punk rock mixed with UK82 style punk housed ina rather swanky gatefold 7” cover.
Also in stock.
BROKEN BRAINS S/T 7” EP £4, Japanese style hardcore from this Scottish band with GISM-esque vocals. KILLER.