Yesterday I collected this beauty and was left with a mixture of elation and disappointment. 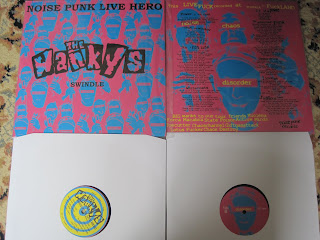 Elation due to the way the cover had turned out (GREAT) and disappointment as approximately 1/6th of the albums were in such poor condition because of the way they were packaged that they are unsellable. Something I will chase up with the pressing plant/agent, but that is another story.
So I have spent the day preparing packages for the 200 copies that will be distributed around the world, in Japan try the usual shops, USA Rescued from Life, Feral Ward, Katorga Works and S.P.H.C., Scandinavia try Kjell's distro and Germany Crucificados. Within the next few days I'll be doing direct mailorder on this as well as a whole bunch of Wankys stuff (just waiting on delivery of "who killed jarco" shirts) including the infamous bottle openers and key rings. In the meantime i'll try and upload this recording to give you a listen.
Posted by MrWanky at 10:19:00 No comments:

Somebody uploaded the songs from our début ep to youtube. I have a handful of the vinyl's left if anyone wants one.

Please For Fuck Me Flexi

The Wankys- ‘Please For Fuck Me’ Flexi with Ploppy Pants Fanzine issue 12 is out now on Problem Records, please order directly from them http://x4298x.blogspot.com/ or Donkey Dan if you live in the U.S.A. I’m assuming the usual shops in Japan and La Vida Es Um Mus (UK) will also be selling copies. We are really pleased with the audio reproduction from these discs (we made a special recording and took care mastering the songs) however, as these flexis are new technology (yes I know they are as old as the hills, but Pirates Press have sort of re-invented them) they are not without problems (no pun intended) and the chances are if you have a cheap USB turntable your copy might skip or jump.  To compensate for this we are offering this release as a download, click on this link to get the songs for free http://www.megaupload.com/?d=8ZOHXRZE enjoy. 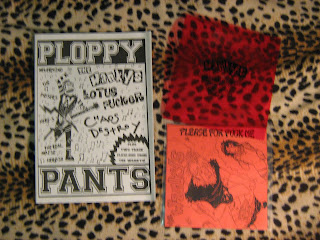