The perks of being a record label executive.

Lucky me got sent some records from Paul of Cider, first up is the new Cider ep on SPHC, 5 songs of snotty raw punk, no I don’t mean that terrible d-beat crust shit, which to me mostly does not sound very raw or very punk. I mean raw punk, as is dirty old H/C punk, more Raped Ass than Scandinavian Jawbreaker, you get that, right? A lazy comparison might be the rather excellent Spanish band Firmeza 10 who recently toured the UK. Picture if you can Gabba jamming with United Blood/Victim in Pain era Agnostic Front. The guitar tone is thick and full sounding with more grit in it than my back after I’ve been on a water slide. No bass on this recording, which they will have on the upcoming tour whilst drummer Bobby is no slouch, he’s solid and spot on. The back cover is homage to the Complete Disorder ep whilst the front has their uncompromising statement “declare your independence from big business”. England had better be ready for what is about to be unleashed upon them.
Next we have the H100’s live LP (Noncommercial Records), this band I’m familiar with due to somebody doing me some cassettes of some 7inches years ago (kids, cassettes are a bit like mp3’s, from an era when mostly the only way you got to hear a new band was when somebody from some far flung place spent 1 ½ hours making you a cassette of their favourite bands). I remember I liked those songs but the most significant thing was they did a ripping Systematic Death cover! Later that band evolved into 9 Shocks Terror who I was a big fan of, love their stuff. Back to this album, wow, this is so much better than I remember those dodgy tapes, great sound, unrelenting solid H/C, great musicianship, the band are on fire, Die Kreuzen meets Japcore. I need to also mention the skinhead bating that is going on at the gig, funny as fuck, actually they pretty much take no prisoners and all the audience seems to be getting some stick. Outstanding! Anyone want to sell me some H100’s records? 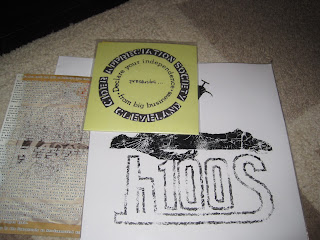