We got our copies today, have 8 left, £3 plus postage. Soon to be re-issue by Total Fucker Records from Boston so if you live there buy from Tim. In Japan you can get one from record shop Base, this is what they said about it
"of cource you know UK NOISY PUNX "WANKYS" and US/BOSTON RAW HARD CORE PUNX"W.K.S.J?" release split item that is only 82 limited. "WANKYS" includes 6 songs that crazy and noizy like attacking locust!! fuckin'total noise punk!! and "WHO KILLED SPIKEY JACKET?" includes 9 songs that are influenced from 80's harecore/punk. they are so dirty, strong and aggressive very very well!! also they are influenced from STREET/POGO PUNK a little so that 90's punk people like,too. they are so nice from Boston! also they will be so good to release split with T&BB.. anyway total 15 songs numbering copies! only 82 copies?..... get hurry up!" 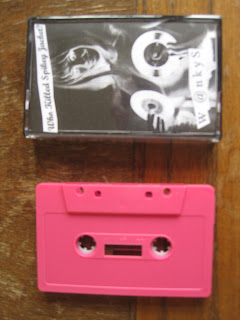