(SOLD OUT)FUZZY GLUE BUZZ- Recomendation of comprehensive rehablitation EP £5.50
WOW. Out of the blue comes this new band, of all places Sweden has decided to embrace the Noise Punk. This is as good as anything that the genre has produced in the past ten years, really catchy Chaotic Dischord/Chaos Channel mash up, with modern production that is super powerful. You know I wouldn't bullshit you, this is the best punk that your money can buy right now. Super stupid and amazing.(SOLD OUT)

PRIVATE SCANDAL issue 3 (SOLD OUT)
Fantastic fanzine from Pogo 77 Records obsessive Gimmick. English language interview with the TITS (ex-Reconsideration) and a historic look at the Slicks, reviews. Amazing. A bargain for a quid. (SOLD OUT) 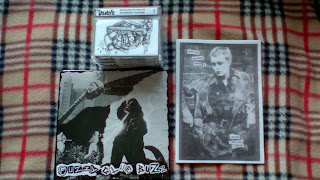